The Lord Lieutenant of Merseyside, Mr Mark Blundell, accompanied by the Mayor of Wirral, Councillor Tony Smith, unveiled a very special Blue Plaque at the Canada Works at Wirral Waters today (21st June).
The plaque commemorates the life and achievements of Cheshire-born Thomas Brassey, one of the great unsung heroes of the railway age.

Thomas Brassey was arguably the most prolific builder of railways that the world has ever seen. By 1847, at the age of 42, he had built one third of the railways in the United Kingdom, including the Chester to Holyhead railway line, and by the time of his death, in 1870, he had built one in twenty miles of all the world’s railways.

Thomas also built bridges, including the Saughall Massie bridge and the Penketh viaduct, and train stations, including Chester and Shrewsbury. In 1834, he built the new Chester Road in Bromborough and, in 1850, he built part of the Birkenhead Docks. In 1852, he was contracted to build the 540-mile Grand Trunk Railway in Canada and decided to build his works in Birkenhead. He named his premises Canada Works in honour of this vast Canadian undertaking.

Canada Works, along West Float, was at the leading edge of ‘best in class’ engineering innovation and fabrication, placing Birkenhead at the centre of a global operation. Over 300 locomotives were made and exported from Canada Works.

Brassey also achieved great things during the Crimean War. In 1854, the British Army and their French allies were facing annihilation, with no field hospitals or any means of getting supplies through. Brassey offered to build the 39 miles of railway from Balaclava to the front line at Sebastopol. Brassey and his loyal workforce, worked day and night and the line was finished in just sixteen weeks. Supplies started moving up to the front line with wounded men coming in the opposite direction. In 1855, the British Army and their French allies, who were still being supplied by Brassey’s men, were victorious.

Blue Plaques, once administered by English Heritage, are historical markers installed in public places to commemorate a link between that location and a famous person, event, or former building on the site.

Conservation Areas Wirral has introduced the Blue Plaque scheme to Wirral and is currently working with Wirral Council to erect four plaques a year to commemorate prominent Wirral citizens, events, buildings or achievements.

Thomas Brassey’s family were among the guests at the unveiling of the plaque along with David Millar, managing director of Heap and Partners Ltd at Canada Works Birkenhead, who hosted a reception afterwards. The business’s founder, William Heap, was Thomas Brassey’s Bridge Master at the Canada Works from 1856 until 1866 and David Millar is only the fifth Managing Director of Heap and Partners since the company was founded in 1866.

David Allan, vice chairman of Conservation Areas Wirral, said: “The contribution of Thomas Brassey to the world’s railways cannot be overestimated. He is up there along with Stephenson and Brunel. To erect a Blue Plaque to celebrate his work is an honour that is long overdue. To erect that plaque on a wall adjacent to his Birkenhead-based ‘Canada Works’ is more than an honour, it is a privilege.”

Richard Mawdsley, director of development for Wirral Waters at Peel Land and Property, said: “We were very proud to welcome such distinguished guests to Wirral Waters for the unveiling of such an important Blue Plaque. Thomas Brassey was a pioneer whose fantastic creations are still living and breathing all around us and we are looking forward to paying tribute to him in the presence of his family.” 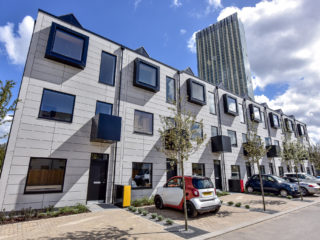 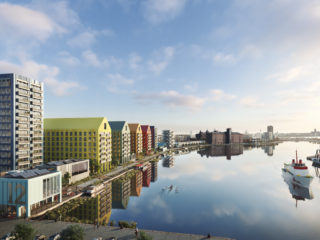